AIPMT 2016 Dates Announced Notification – CBSE has announced that the AIPMT 2016 exam will be conducted on May 1, 2016. According to the notification that was published at cbse.nic.in, the All India Pre Medical / Dental Test will be organized by CBSE. MBBS and BDS admission for 15% all India quota seats in except few states will be done on basis of the AIPMT exam. The CBSE AIPMT 2016 notification is now available to be viewed. Medical aspirants from all states of India are now gearing up for the largest medical entrance exam of 2016.

AIPMT 2016 application form will be available online from the third week of December, 2015. All the students who have obtained 50% or more marks in physics, chemistry, biology combined in class 10+2 exam can apply here. The students who will take the board exams in the coming year can also apply subject to qualifying exam. Also, minimum age limit for applicants is 17 years. Only those candidates who are 17, or will be of the age by December 31, 2016 can apply.

Date of AIPMT 2016 exam is 1st May, 2016. Continuing the past years’ trend, the exam will be held on the first Sunday of May. Exam date of AIPMT is determined by CBSE in accordance with central and state board exams. As the board exams finish by the month of April for most students, the dates will not clash.

AIPMT 2016 dates have been announced by the Central Board of Secondary Education (CBSE), New Delhi. The AIPMT 2016 important dates enlist the information pertaining to AIPMT 2016 exam date, application form filling date. Also further details of dates of downloading admit card and result will shortly be announced.

About All India Pre Medical / Dental Test (AIPMT) 2016 – The medical entrance exam is essentially a means to determine meritorious candidates for MBBS / BDS admissions. Eligible candidates need to appear in the exam for 15% All India quota seats in all states. Depending upon the domicile of the candidate, he / she gets admission in respective colleges participating in AIPMT.

More than 5,00,000 students had appeared in the AIPMT exam last year. To get admission in the best medical and dental colleges, you need to get a very high rank. AIPMT Preparation should ideally begin at least six to eight months before the exam. As the announcement has been regarding date of AIPMT 2016 exam, you should start preparing for the exam now! 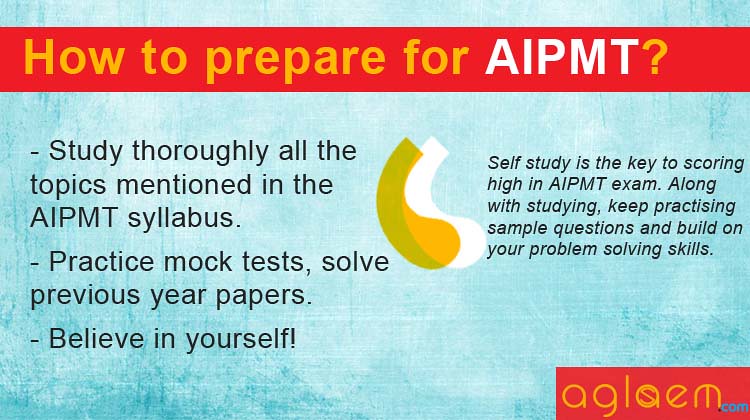 A brief study plan to prepare for AIPMT 2016 in six to eight months is given below.

#1 Start with the basics: Have you covered class 12th syllabus by now? If yes, that’s great! You can start revising class 11th topics now. If you are yet to cover XII class topics of physics, chemistry and biology, now would be a good time to set up the pace.

By the end of October, try wrapping up your syllabus once.

#2 Analyze your strengths and weaknesses: You will know best which subject areas are weak and strong for you. Devote a little more time to your weak areas and try to get some help so that you can ace that too. Keep practicing questions along with studying theory. Apart from just knowing things, you should be able to implement it in problem solving.

#3 Time Management: Are you sleeping too much or too less? Are you wasting too much time in travelling (coaching classes or elsewhere)? Will it be a good time to de-activate that facebook account?

Time management is crucial for AIPMT 2016 preparation. The way you study in the last few months determine your performance on the day of exam. It is best to chart a study table and try sticking to it.

Set realistic goals and reward yourself when you achieve them. For example if you cover all the things you had marked in the study plan, on the weekend go out with your friends!

#5 Know you can crack AIPMT!: AIPMT is not an exceptionally difficult exam. In terms of difficulty level of questions, in ranges in moderate to lower difficulty level. The hurdle is the test takers to seats ratio. It will be easy to score good, but the point is to score better than others.

From the very beginning tell yourself that you can do this! Build up your confidence and let hard work do the rest. Check out more on AIPMT 2016 Preparation for Class 12 Students.

Make your calculations as accurate as precise with significant figures.

D.El.Ed: How to apply and how is it different from D.Ed