Bajaj Qute: An alternative to the traditional auto rickshaw not yet accepted due to safety concerns 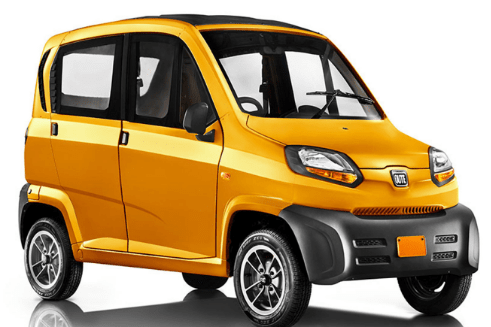 Make no mistake, the Bajaj Qute isn’t a car, it’s just a Quadricycle which was initially meant to be an alternative or a replacement for the traditional 3-wheeler auto-rickshaws in India. However, doubts from the government and various PILs regarding its safety have made this ‘Made in India’ quadricycle not being sold in the country itself.

What exactly is the Bajaj Qute?

It is a quadricycle, as said earlier and is supposed to function as a commercial vehicle. It is supposed to be a viable alternative to auto rickshaws because of the presence of doors, which makes it safer for passengers. At around 450 kg, it’s a really light which makes it easy to be maneuvered around the streets. Powering the Qute is a 216.6cc engine which would have options for CNG and LPG. The 13.2PS of horsepower allows the quadricycle to speed up to 70km/hr. other than that, changing gears is extremely easy with the Qute as the gear shift levers are mounted on the dashboard just beside the steering wheel.

Who is it for?

Well, it is currently being touted as an alternative to the current 3-Wheeler auto rickshaws. Which is why it might be just a commercial vehicle. As per Bajaj, this is strictly an anti-car, the prime purpose of this vehicle is to bridge the gaps between a three-wheeler and a traditional four-wheeled car. The only thing preventing it from a release into the Indian markets is the government and the several PILs which were filed against the quadricycle with concerns for the safety of this vehicle on roads.

However, now that it has undergone strict safety tests and the fact that the build quality and weight of the Qute could not probably cause any serious damage in minor accidents, it’s likely to be allowed on the Indian roads at the end of the year.

A key USP on which the Qute would be sold is the environment-friendly engine. The vehicle is capable of producing an average mileage of 36 km per liter, along with that, it leaves a very low carbon footprint of just 66 gm of CO2 per km. Such low rate of emissions would make the Bajaj Qute the greenest “4-Wheeler” in the market. There are some other elements which make this quadricycle completely different from the current 3-wheeled auto rickshaws running today. The first obviously noticeable difference is the presence of 4 doors on the Qute, which makes it comparatively safer than other autos. The rear seats are capable of a 60/40 split for the accommodation of extra luggage.

Overall, the presence of a windshield with wipers at the front, doors, and windows make the Qute look more of a car than a quadricycle. But the absence of any features other than these is enough to make one remember the target buyers of this small vehicle. The Pricing of the Qute has not been confirmed yet, expectations are that it may sell at a price range 1.2- 1.6 lakh across different variants.

As of now, the Qute is expected to get launched in India at the end of this year, that too only if Bajaj finds a way to get out from the various petitions and PILs filed by other competitors and unions against the release of this Quadricycle. However, the Bajaj Qute is already ready for production and is exported to Turkey and Sri Lanka.

Battle of Mid-Range Smartphones: Which is the Best One for you?

Battle of Mid-Range Smartphones: Which is the Best One for you?