On Friday morning, Dangal morning shows saw around 75% occupancy in many city theaters. This was a respite for many movie halls that have seen a lull for the absence of any big movies in the past few weeks. Based on the real story of wrestler Mahavir Singh Phogat, Dangal has touched hearts of many in the audience. Along with a strong marketing, Dangal is doing well at the box office for its content and good word of mouth. Since Aamir Khan’s PK did tremendously well by creating milestones, a bigger question than whether Sultan is better or Dangal, is whether PK is better or Dangal. Dangal is doing good in single screen theaters, multiplexes. In addition it is reported that Dangal has performed well abroad also. 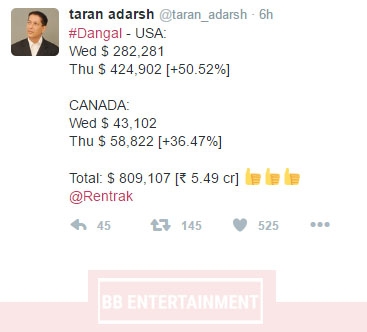 Dangal Reviews Of The Movie Are Good, Both Critics, And Audience Are Happy

Industry analysts have reported that Dangal has got good box office collections in US, Middle East, and UK. Maximum money has come in through UAE with UAE GCC at AED 2.5 m which is approximately 4.62 crore INR. Thursday preview in UK earned £ 118,487 which is around 98.67 lakh INR.

The comparison between Sultan and Dangal have come up because both movies have wrestling at the heart of their stories. Sultan opened in cinemas one day before Eid and collected INR 36.54 crores on day 1. By the first weekend it went on to earn INR 180.3 crores. 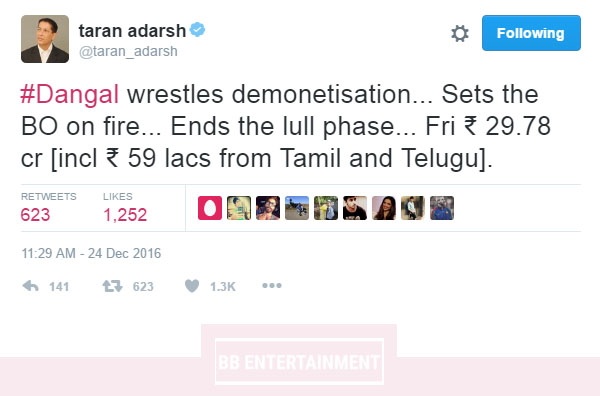 Based on the inspiring real life story of Mahavir Phogat, Dangal has become the seventh / eighth highest opening movie. In addition, Dangal is the second highest non-holiday opening hindi film.

Most of Dangal box office collection came from North India. In East Punjab the release of Dangal marked fourth highest opening day and in Delhi / UP it was  the sixth highest opening day. In Mumbai it is beyond top 10 highest opening days. A factor that is important to realize at this point is that this Dangal Day 1 Box Office Collection is on a non-holiday. Reviews of the movie are good and hence there are good chances that the movie does even better on Saturday, and Sunday. Dangal’s Tamil and Telugu versions were average performers with box office collection of around 50 lakh INR.