SSC CGL Admit Card 2016 availability date is expected to be around third week of April 2016.

Have any query regarding SSC CGL 2016? Ask your queries at the CGL Discussion Forum

According to the Staff Selection Commission Combined Graduate Level 2016 exam notification, admit card of SSC CGL 2016 will be available at least two weeks before the exam. However, last time the regional offices started releasing CGL admit cards almost one month before the examination, and a similar schedule is expected to be followed this time.

Admit card of SSC CGL 2016 Tier I examination is expected to be available in April 2016, third week.

Download admit card here – In the table below, links where admit card data is going to be released are given.

Go to the respective region’s SSC admit card page and download admit card as soon as they are available.

As and when the commission issues admit cards, roll numbers are also intimated simultaneously. Follow the steps given below to download and print admit card of SSC CGL 2016 exam.

The steps given above are general, and may differ for each SSC. The procedure is simple and candidate friendly, and candidates need not panic about issues faced during downloading the hall ticket. 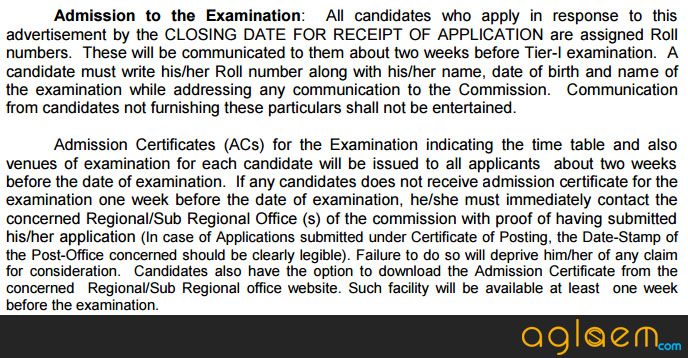