The French open 2015 winner in Stan Wawrinka had a wobbly start to this year’s slam with a 5-setter win but he has since then showed signs of his usual gameplay – with the most crucial part of his play which is his backhand returning strong; which puts the opponents under serious threat of unable to return the volley. The defending champion in his top 16 clash faced off with Viktor Troicki, Wawrinka won the first set 7-6 but wobbled in the second set tie-breaker and lost the set 6-7, coming back strong to win the next 2 sets 6-3 6-2 and securing a quarter final birth. The 3rd seed will be facing the world no.55 in Ramos Vinolas who shocked the Canadian top seed Raonic in their top 16 clash. 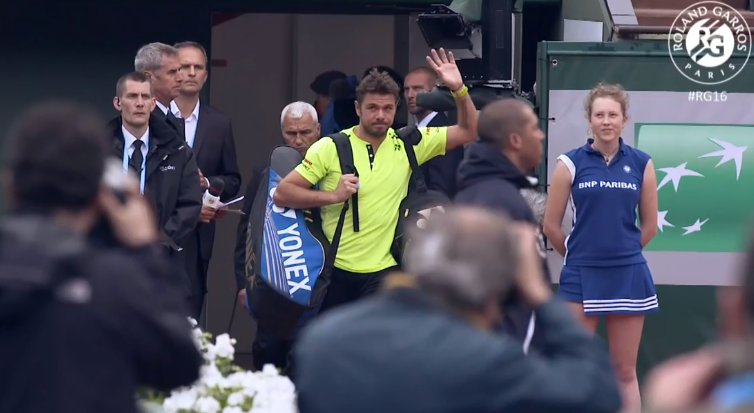 Similar to Wawrinka, Murray too found it a little tough to get some easy wins under his belt in the first 2 rounds of the tournament but has since looked coming more into his own – he too has qualified for the quarter finals after beating the 6ft10 American in John Isner – the big serving “giant” whose serves are hard to return and it’s quite usual for the American to have set tie-breaks. The first set as expected had a mammoth tie break in the first set which Murray won 7-6  (11-9) but managed to break Isner’s serve in both of the following sets which Murray won 6-4 6-3.

Another prominent face at this year’s French Open is that of the home-boy and now the French no.1 (as Tsonga has retired), Richard Gasquet. He has also reached the top 8. Facing a tough round 16 opponent in Japan’s Nishikori, could have posed some serious threat to Gasquet’s contention in the tournament but Gasquet was too hot to beat with the partisan home ground – with the home boy winning the first 2 sets, losing the 3rd but fighting back to an easy win in the 4th to grasp a quarter final birth 6-4 6-2 4-6 6-2.

In the women’s draw, the 108th seed Shelby Rogers who beat 10th seed in the world Petra Kvitova, had yet another victorious outing with her beating the 25th WTA seed Begu – a visibly emotional Rogers found it tough to contain her emotions after yet another shocking win over a top women’s seed; it’s truly turning out to be a dream outing for her in this French open and she explained that her hard work through the last one year to perform well at the slam is paying off.

We need a little sunshine on this cloudy day. Go back to the moment @Shelby_Rogers_ clinched a QF spot at #RG16. ☀️ https://t.co/zN2DPcvlBc

The Indian tennis fans had a bitter day 8 of the French Open with the Swiss-Indian pairing of Hingis and Mirza crashing out of the French Open in the 3rd round and this comes as the biggest upset in the women’s doubles with the two holding the world ranking of world no.1, their match was against the qualifying pair of Krejcikova and Siniakova – to everyone’s shock not only did the world no.1 pairing went down in the match but they got an absolutely thrashing at the hand of the unseeded pair with a 6-3 6-2 loss.