Gmail Server is down! Yes, you are hearing that right. People from several parts of the world reported on twitter that they were not able to open their gmail accounts on 13th March 2019 right after the clock ticked 10:30 in the morning. The most affected were states in Europe, Asia as well as the United States of America. Just like Gmail, people also were not able to open their Google Maps and Google Drive. However Google has not commented on the Gmail Sign in outage so far.

So, how to check if your gmail is not working? Well, just try to sign in your respective Gmail account and it will return back you login page to Gmail wont load. If you are thinking about the fact whether it is gmail down or just me? Well dont worry because people worldwide are suffering gmail down problem of 2019. The Gmail Account Problems have been felt by thousands of people worldwide. The Gmail Down News is doing the rounds on Twitter since the past half an hour. 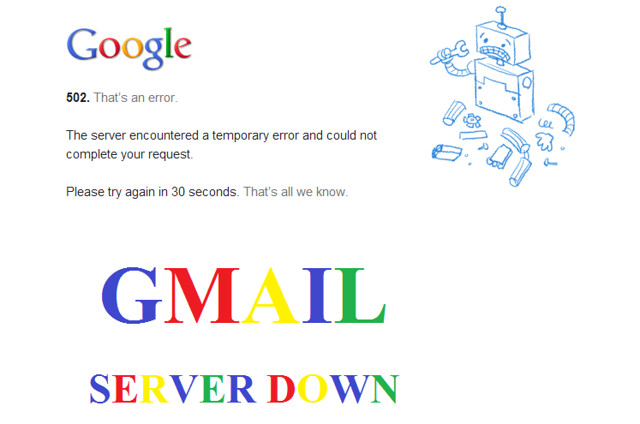 According to some resources, more than 1500 people from the U.S.A. and more than 600 people from Australia have reported that they are actually the Gmail Worldwide Outage. Many number are still unknown. The errors in the Gmail Server not only were restricted with Sign In but also were concerned with uploading and downloading Images. People who switched to the street view mode, reported seeing a black screen instead of their default settings. Since, the news became viral, twitter is all gushed up with the speculations of whether Google has been hacked or its servers been compromised. But do not worry as the news has not been confirmed until now.

Google Hangouts were the most affected globally as people the platform for exchanging professional information. With the onset of the Gmail not working news, people have started talking about why should you switch to Yahoo and other search engines for that matter.

People have been reporting their anguish against the glitch and reported their anger with the help of their twitter handles. While some other tried to cool down their twitter mates. It was just yesterday when WWW turned 30 and today when Gmail server showed the glitch, people termed it as an ironical fact. The Gmail is just like a motherboard for each and every application that we use and you can imagine how difficult it is for people to work without Gmail for even a second.

When people tried to send Emails from their Gmail accounts, they reported to see pop up declaring that the message was not sent which created a ruckus in the scenario. The Google Maps are the most used by cab providing firms such as Ola and Uber. They also reported that they were not able to use the Google Maps application which is the most important factor when the ride is on.

We have also come across reports that confirm that this outage has caused Google to loose millions of dollars. Since, Youtube is also a part of the Gmail clan, people are reporting it to be unavailable too. There are only two things that you can do in this condition, one is to take out your anger and frustation and other is to give the servers some time to bring back the monotony. We would suggest you to go with the latter because after all, its all internet, it can goes haywire some time

If you are also affected with the glitch and your Gmail is also not working, try out the other way these alternate ways to solve your problems. One is to switch to another search engine like Bing and Yahoo for some time. These search engines will help you in scrutinizing things you want to search at the moment. And if you want to send an Email for the same from your gmail account, the solution is to wait for sometime. If the message was for the intra -company associates, you can choose to convey it verbally by holding meetings for the same.

Since, the Gmail Server is down, we request you to keep calm because Google will surely bring a solution to the users in a short duration after investating and joining all the dots that are leading to the glitch. Google will soon confirm the news but chose not comment on their Server Outage so far.

If you are also experiencing this issue then lets us know in the comment section below.