The launch event of the Android’s latest version, ‘Oreo’ was hyped so much that people were as excited about its launch as they were about seeing the Solar Eclipse. Both of these events took place in the US, but while many got access to view the Solar Eclipse through a live stream on Internet sites like YouTube. The tech nerds awaiting Android Oreo’s launch event through a live stream were probably dejected because the only thing shown on the live stream was a 5-minute timer, a totally expected unveiling of the Android Oreo Statue and an advertisement.

The live stream, expected to start at 2:40 pm ET (12:10 am IST) made me sit in front of my computer with a packet of snacks awaiting the unveiling of Android 8. As it began, the unveiling of the Android Oreo Superhero Statue totally fired me up, though the name was already spoiled thanks to some leaks, the spark of excitement was still within, and it was triggered as the stream went live.

After the unveiling came what looked like an advertisement of the Oreo cookie sponsored by Android. Well, that was all that was there to see! While there surely was much more going on the event taking place in the US, for those who expected a live stream of the full event, it was a massive frustration.

This was likely an error from the presenter’s side, as the full launch event was hyped up and expected to be live streamed just like the previous launches of software and devices.

Anyway, if Android O turns out to be good enough, there’s no way one will remember this minor error from Google.

Here are a few things and features to look for in Android Oreo:

#1 Android Oreo will be compatible with Google’s latest Instant Apps feature, which negates the need of installing an entire app to go through a particular site, and instead loads an app-like interface to be used temporarily from the browser itself!

#2vWhile the preview builds for Android 8 are already available in devices like the Google Pixel. Testing and full rollout would soon start on the Nexus 5X/6P and pixel devices, and would later roll out on selected devices from major manufacturers like Samsung, LG, Motorola, HTC, Sony, Lenovo and other companies.

#3 One thing to be noted is the fact that Android Oreo doesn’t quite have any major change from the previous versions. What it does have, however, are some minor changes and hidden tweaks which make the speed, optimization and user experience much smoother than previous Android versions.

#4 Among the new tweaks, there is an ability of smart text recognition, which would suggest proper usage of any selected text, number or an address from the phone screen. Say, you select a particular number on a web page, and there would be an option to place a call on the number among the other options of cut, copy and select.

#5 One notable thing among the previous three releases of Android has been that there hasn’t been any highly radical change in terms of the looks and design of the software. This continues with the Android O, as the changes in design only include a new settings menu, a new notification shade, and Notification Badges.

#6 Through the System UI Tuner, as seen in the developer previews of Android O, users can change the lockscreen shortcuts and set any app of their preferred choice on the lockscreen.

#7 Google’s focus with the Android Oreo has been on improving battery life without compromising too much on performance. Thus on the latest version, the background apps rarely used would have limited functioning, which in turn, would save some battery juice.

#8 Another new feature in the Android 8.0is the Picture-in-Picture mode, through which a user can have a video from a small side of the screen while being able to access different apps without stopping the playback of the running video.

#9 The long-press functionality to use in-app shortcuts was introduced with the Google Pixel in Android Nougat. Oreo takes it to the next level, as users can also access notification badges through the same long-press method.

Android O won’t be available anytime soon on all major flagships. However, for those who want to grab a device with the latest Android, the next-gen Pixel device would already be on their purchase list. Oreo seems to have a lot of improvements over Android Nougat, but at the same time, one must not forget that not even half of the current android users are even using Nougat, the ongoing version of the software in the first place. 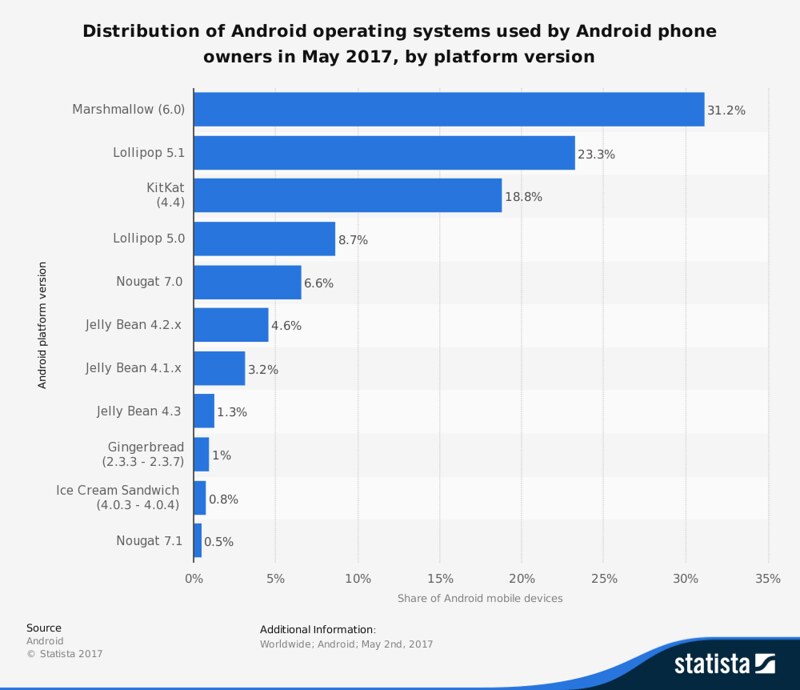 A majority of users of Android still use the previous three versions of Android, namely Marshmallow, Lollipop, and KitKat. Though the figures are constantly increasing for the Android Nougat,  the pace of the oncoming updates might seem a little too quick for some. Such a fast pace of upgrades might be taking place in order to remain in competition with the iOS on Apple’s iPhones. But the implementation of updates on Android devices is far more difficult as compared to upgrading software on an iPhone.

Unlike iPhones, Android Software is tweaked and customized by nearly every manufacturing company, which makes it difficult to have updates rolled out on different devices simultaneously. This is one of the reasons why companies like Lenovo, Motorola, and Google’s own brands of Pixel and Nexus series use Stock Android to make the rollout of software updates smoother for the users.