Holi Essay in English ( With Headings)

Holi is the festival of colors that is celebrated in the month of March. This time this colorful festival of India will fall on the 18th March 2022 which is a Friday. The one great thing about this festival is it binds people of all religion together. They try to resolve their conflicts and hug and sort it out. On this day, people make and distribute Gujiya, Papad, and Kachori. The day is classified into two days of which one is Holika Dahan and the other is Dhulandi. Like everything has a past, the festival of Holi has history attached to it too.

Wish your best friends with these cool Happy Holi 2022 Gifs!

There was a king called Hiranyakashipu who after gaining the boon of being indestructible from Lord Brahma started believing that he was a god himself. He hated Lord Vishnu because he had killed the king’s brother Hiranyaksha in his Narasimha Avatar. The King’s son Prahlad was Lord Vishnu’s admirer and worshiped him with all his heart, this fact irritated Hiranyakashipu to the extent that he planned to kill his own son. He tried a lot of times but he always was unsuccessful. At last, he opted to take help from his sister Holika who was immune to fire. She took Prahlad in her lap and sat in the fire itself. The child started chanting the names of Vishnu and came out clear but Holika died despite the boon granted to her. Thus, this festival marks the victory of good over evil.

The festival is celebrated with pomp and show even today. On the day of Holika Dahan. People collect bunches of wood, grass and cow dung and use it to light up the fire. The next day, Holi is played by throwing a splash of colors on each other. The festival of Holi is celebrated in different ways in different states of India. For instance, In Braj “ Lathmar Holi” is played in which known men throw colors on the ladies and then they are beaten with a rope made by twisting a cloth. The rope is given the name of “Kodha”. Besides this, people of Vrindavan celebrate the Holi festival by throwing flowers on each other. In Haryana, the tradition of Lathmar Holi is still trending. On the whole, Holi is a festival of joy and a day when you forget all your sorrows and pains and just play like a child.

If you wish to know the full history of the Holi festival, you can check it out here.

Holi Essay in English in 10 Lines 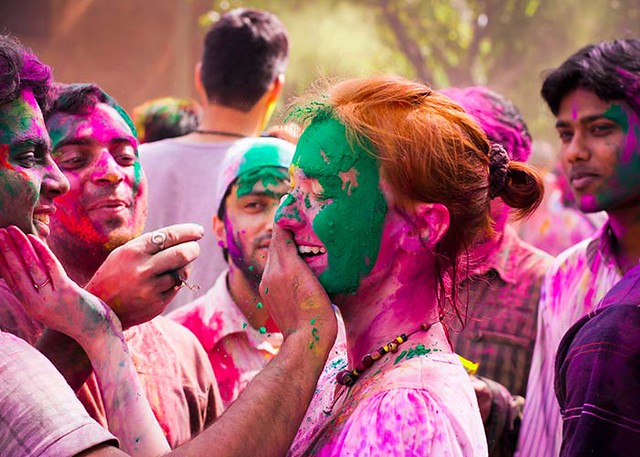 Here are 10 more lines on the Holi festival. This essay will work best for students who are going to take part in school competitions. We advice you to learn these 10 lines on Holi by heart so that you know at least the gist of this festival by heart. Even if you forget the whole para, you can easily write an essay on Holi in English with the help of these 10 lines on Holi Festival for Class 1, Class 2 and Class 3.

# On this day, people play with colors and water guns.

# The festival of Holi starts with the Holika Dahen which is done one day before the “Dhulandi”.

# On this day, people visit their friends and relatives place and put color on them. They also distribute sweets to each other.

# The main and the most famous food of the Holi festival is the Bhang and the Gujiya.

# The Holi festival is loved and celebrated worldwide.

# The main reason for celebrating Holi is because Lord Vishnu’s admirer Prahlad survived his father’s effort to kill him.

# The Holi festival is made with flowers in the city of Vrindavan.

# This day also marks the start of the season of Spring.