We in India celebrate all festivals with pomp and show but Holi is associated with several cultural and historic rituals.

The most well-loved and celebrated festival- Holi is Beyond colors, Holi- a happy go lucky festival that amalgamates friends, family, and fun together with the sprinkle of colors and sweet loaded- Gujias are the most awaited, celebrated festival of the year. The exuberant festival of Holi marks the immortal love of Lord Krishna and Radha. The multi-ethnic festival is celebrated with buoyant colors, jubilance of people reuniting, the sweet-savory of Gujia. Holi marks as a symbolical welcoming of Spring in the month of Falgun. The mythical sense of Holika-Dahana, victory over the evil is also the major reason for celebration.

Wish your loved ones with these ” Best Holi Wishes”

The advent of Holi is unique to every state, to some the festival of Holi is distinguishing filled with colors, flowers, and blessings while in some parts the spirit of Holi is celebrated in the array of different activities. This festival is full of a myriad of activities that takes place all around the world. Each and every state celebrates the festival with tremendous cheerfulness and has their own flair of celebrations. Cities like Mathura and Vrindavan are well known for their traditional celebration of Holi, spanning days before Holi and is visited by foreigners across the globe.

Mathura: The Divine Spirit of Holi

The birthplace of Traditional celebrations of Holi- Mathura is soaked in the immortal love of Krishna-Radha, beats the drums hard in Holi. The range of Holi is spanned with activities such as Lathmar Holi in Barsana and Nandgoan that begins few days before the grand festival. Holi celebrated here is spiritually enchanting, colorful and has a divine call emerging from the ghats/banks of Ganga. Dhwarkadeesh is most visited during this festival. 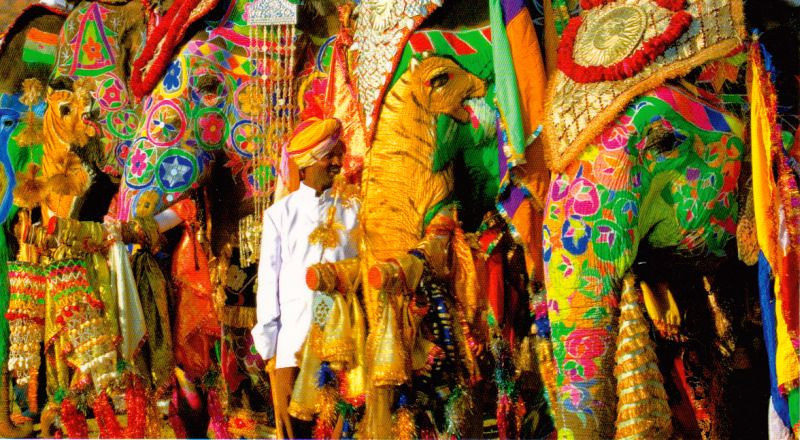 Jaipur the Pink City celebrates Holi in its own unique style. The theme for which is ” Rangeelo Rajasthan” most of the time. People celebrate this festival here by cooking special dishes like Shakar Para and Gujiya. On this day, the forts and places of historic importance are decorated with beautiful flowers garlands.

Want to capture a divine spirit of Holi with feathers spread in the vicinity? Vrindhavan awaits you. The air blossoms with the flowers, On the Ekadashi before Holi, the Banke Bihari Temple at Vrindhavan blossoms its Phoolon ki Holi, by refusing to celebrate Holi with dry-wet colors, instilling its air with flowers all over. The town echoes with tales of Radha and Krishna and celebrates the festival with utter sincerity and devotion. The travelers from across the globe and nation come to witness the truest of joys bestowed upon them with the mystical ways of flowers sprinkling all over.

Delhi- The Heart of Holi

The urban rowdy style of Holi is the most celebrated and cherished way of celebrating Holi. The Heart of India emerges as one of the most visited places during Holi, where beats of drums, the bass of music and buzz of water balloons, colors and Bhang are well advanced and witnessed in every corner! The infusion of Desi with the crisp twist of modernity rejoices in this festival. On the eve of Holi, Bonfires or Holika are lit where the celebration of the victory of good over evil is celebrated.

The extravagant celebration of Holi emerges with customs spread in the megacity sets the tune of the festival, right. The urbane gaga over the festival is irrefutably essenced in every corner of the street. Every year, the locale of Mumbai splendidly performs the event of “Matki Phod”. Inspired by the lighthearted gimmicks of Lord Krishna, who drooled over the pot of butter. Similarly, a pot of butter is hung on the top, open to chase and conquer by the youth of boys forming pyramids to get to the top.

Jaipur and Udaipur: The Essence of Royal Holi

Elephants, camels, horses, and folk decked with elaborately decorated materials, used to march in a Royale parade. Udaipur, the city of Lakes celebrates Holi in their way. The grand celebrations of Holi are spanned in two days. In the first day, there is a magnificent palace possession from the royal residence to Manek Chowk at the city included bedecked horses and the royal bands. Later the sacred fire is lit on and the statuette of Holika is burnt. The celebration in Jagdish temple is quite very popular which includes dances on the traditional songs in a traditional way.

Holla Mohalla is the biggest festival celebrated a day after the Holi at Anandpur Sahib. Holla meaning “the masculine line of Holi”,  is celebrated in the state of Golden-rich Wheat- Punjab. Their context of celebration varies from the Hindus, as Holla Mohalla is known for its annual fair started by Guru Gobind Singh Ji, dating back to 1701, as a protest against rising Mughal intolerance. One can photograph the line of warrior spirit, as people disguised as warriors, demonstrates the heroic range of martial arts by imitating battles with weapons. The two days celebration of Holla Mohalla starts from the day of Holi following the exuberant activities ranging from mock battles, exhibitions to displaying of weapons, followed by Kirtan, Music and poetry competitions.

The boisterous festival is celebrated with pomp and music across the country but when the call for a sweet-smoothing Holi is tuned, Hampi is where you should rush to celebrate the grandeur of this festival. Hampi celebrates Holi with the play of colors, welcoming the festival with drumming, dancing at the backdrop of the ruins of the grand Vijayanagar Empire. The crowd is witnessed flocking in the waters of the Tungabhadra river. The rejoicing spirit in the most simpler way is heart to the divine experience.

Holi and Rangpanchami Date in India

Things We Like About Holi : This Is Why Holi Is Our Favorite Hindu Festival

Things We Like About Holi : This Is Why Holi Is Our Favorite Hindu Festival