There’s no denying the fact that the Samsung Note series is iconic, and it is one of the few devices besides the iPhones which have a notable amount of devoted fans who’d love the phone despite its problems and errors. The Note 7 was on such phone, expected to make the lovers of the phablet crave for it more than ever. At the time of launch, it was even said to become the best Smartphone / phablet of the year, but the cases of Battery Explosions brought in a nightmare expected by no one.

A year later, Samsung has almost fully recovered and has launched the Galaxy Note 8, with a brilliant tagline “Do what you can’t”, precisely made to appeal to the power users and to those who consider their smartphones as a canvas to create and showcase their skills.

It’s been some time since the Note 8 was unveiled by Samsung, so there’s no need for a brief overview of specifications. But for those who’ve been living under a rock all this time, here’s a quick overview: 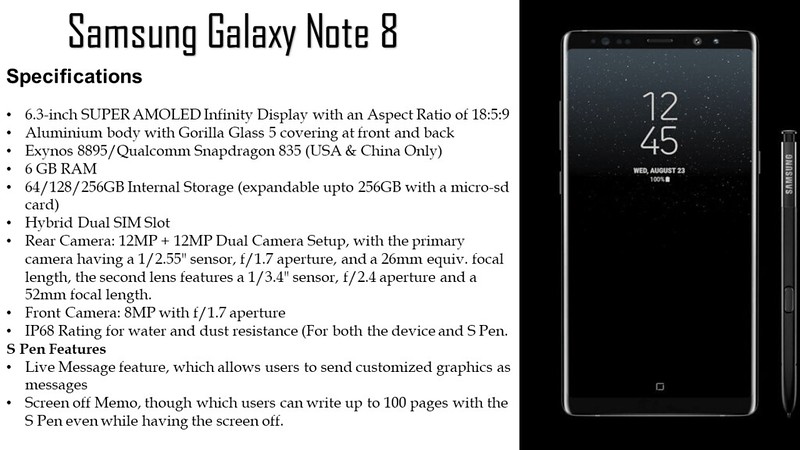 Just like it used to happen before, the new Note 8 has all the capabilities and hardware specifications of the S8 models, along with some new features and tweaks. However, the dual camera setup at the back is indeed a major change from the past. That aside, the other notable element is obviously, the S Pen, a more squared design of the Phone compared to the curved corners of the S8 models, and a screen just about 0.1 inches bigger than the S8+.

Other differences include some minor software features such as the live message and the screen-off memo. Truth be told, the S Pen isn’t something which anyone would get used to very quickly, and would take it out from the sides of the phone every time he/she uses it. One has to consciously decide to use the S Pen for any purpose intended. This is exactly why the device is meant for those who do have a particular use for the S Pen in mind.

That is what the Note series has been all about, hasn’t it? Well, to some extent, Yes. The major part of the Note’s success was the majority of enthusiasts who found out effective ways to use the S Pen. But with time and each new release, people seemingly forgot its intended purpose and the Galaxy Note series was growing, and being considered as the equivalent of the iPhone’s “S” series models.

This seems to be justified even with the Galaxy Note 8, as it has essentially all the basic features of the S8+ with a gimmick or two, a couple of features, a major hardware addition and an S Pen to top it up. For some like me, though, there’s a question which needs an answer. Why exactly should I get a Note 8 over its S series equivalent?

A major reason to have this question is the Battery Capacity of the Samsung Galaxy Note 8. Granted, the disaster of the Battery explosions in the Note 7 last year gave Samsung a legitimate reason to be cautious in their approach with battery implementation. However, a capacity of 3,300mAh used in a Phablet with a 6.3-inch Quad-HD display and high-end specifications doesn’t seem to make good sense. The target audience of the device, the power users and a majority of S-Pen lovers wouldn’t want their device to be put on charging multiple times during a day.

What makes the situation much more problematic is the fact that the S8+, the closest sibling to the Note 8 offers a bit more battery capacity than the latter(3,500mAh). To add to the dilemma, the Note 8 was launched at a starting price of  US $930, (approx Rs.59,400). In India, it would be likely priced around Rs. 65,000 for starting variants, with the higher variants having increased memory being priced around Rs. 75,000-80,000. Such a pricing pits it against the 6GB RAM +128 GB variant of Samsung Galaxy S8+, which currently sells at Rs. 74,900.

The Galaxy Note 8 is likely to be priced higher than the S8+ variants, which would leave a few consumers confused with choices. On one side is the Samsung Galaxy S8+, having all the bells and whistles of a flagship, with a large screen size and enough features. If one does not want a large screen, they can even opt for the smaller S8 version which is compact and easily fits on a single hand.

On the other side is this newly released Note 8, having everything the Samsung Galaxy S8+ has, with the addition of an S-Pen and a dual-camera setup, a deduction of battery capacity (although quick-charging solves most of the problems with battery these days, a higher capacity is still necessary for some potential juice in emergency scenarios) and a possibly increased price.

For a confused buyer, the only thing to look for would be their use usage patterns and scenarios. For creative and artistic people, who can consciously remind themselves to make use of the S-Pen, and for those who love their cameras; the Note 8 might be a great deal with a sacrifice of some potential battery juice.

But for those power users who’d like to have their device at least stay charged for a day, and for those looking to extract the most value out of their money; the Note 8 doesn’t really have anything too good to offer. However, it’s still a great device for those Note series enthusiasts who suffered the Note 7 debacle and still trusted Samsung to deliver a better alternative this year and revamp its Phablet device.