Many people, in today’s day & age, remember the things that the British left for us. In a manner of speaking, the British paved the way for advancements in the fields of transport (Railways, Airplanes & Cars), religious justice (banning practices like Sati & Child Marriage), administration etc.

But, most people ignore the biggest contribution that they made to the Indian common man. The two major gifts the British bestowed upon the Indians are, without doubt, Cricket & Cinema.

Over the years, India has made over two hundred thousand (two lakh) movies. So, you can understand the magnitude of the task at hand…

Also Read: Movies You Should Watch To Be More Successful

I understand and realize that every individual’s choice is different. Movies that I like may not be liked by you. There is going to be, as always, a lot of controversy over my selection & that is why, trying to stay as neutral and unbiased as possible, I came up with a fair system of judgment for these movies…

With this approach, I should be able to keep my differences aside. So, here we go:

The story of Gabbar, Jai & Veeru is implanted into the minds of the Indian public. I don’t need to emphasize the importance of this film in shaping the future of Indian Film Industry. This movie set the tone of an era of action films to follow. The bond of friendship depicted between Jai and Veeru, so well established in this three hour epic, is still used as a cornerstone for movies today! India’s biggest hit by far, it propelled Amitabh Bachchan to superstardom & landed him an award for actor of the millennium too!

The Oscar Academy, while adding Anand to their library, admitted that if such a movie would have been made by an American, they probably wouldn’t have nominated any other movie (or actor) for the ‘Best Movie’ & ‘Best Actor in a Lead Role’ Oscars! The story of Anand, a man troubled by lympho-sarcoma of the intestine (an incurable disease till date), leads him to touch the lives of the strangers that he spends his last few days with such immaculate profoundness that you can’t help but feel sad for the character that Rajesh Khanna brought to life. Anyone who has ever seen this movie would subscribe to the fact that this was one of the most emotionally exhilarating experiences of their lives. It’s a true masterpiece!

Those who hadn’t seen Mughal-e-azam, for the insane reason that it was made in black & white, got their wish fulfilled when it was re-coloured and re-released a few years ago. The semi-fictional story follows the events & happenings of the Royal Mughal household. Prince Jehangir’s (Dilip Kumar) struggle with his father, the Mughal Emperor Akbar (played by legendary actor Prithviraj Kapoor) over his love with a courtesan by the name of Anarkali (played by the beautiful Madhubala) takes centre stage. Who doesn’t remember the mildly veiled rebellious undertones of the mockery Anarkali makes of Akbar while waltzing to the tune of ‘Ab Pyar Kiya Toh Darna Kya’? It is the sheer intensity of your connection with Anarkali & the magnificence of the Mughal Royal scene that draws you in & no matter how strong you may be, your eyes do tear up when Anarkali is being buried in a wall at the very end. The value of the rebellion of a mere courtesan against the Indian Supreme is not lost in the movie’s message!

The plot of a story is usually the critical factor in its appeal or its success. The true persona of a movie, however, is revealed in the simplicity of the story telling. If a viewer can guess the story and the inherent plots and sub-plots of a movie, the movie is as good as dead for him, or so people thought until Ashutosh Gowariker came along with this magnum opus.

Everyone knew from the very start what direction Mohan Bhargava’s story would take but it was the journey that made this movie stand out. You feel at one with him, you feel as if it’s you, not Shah Rukh, who is going through the emotional turmoil of having to choose between Gita & Kaveri Amma in India or his job & life in America.

The rustic feel of the typical Indian village, the beautifully crafted songs, all entice and wrap you around in this journey of massive emotional proportions. This is my personal favourite movie of all time.

DDLJ is the platform that launched Shah Rukh Khan as a national superstar. His pairing with Kajol is considered to be one of the most romantic, most profitable unions in Hindi Cinema history. 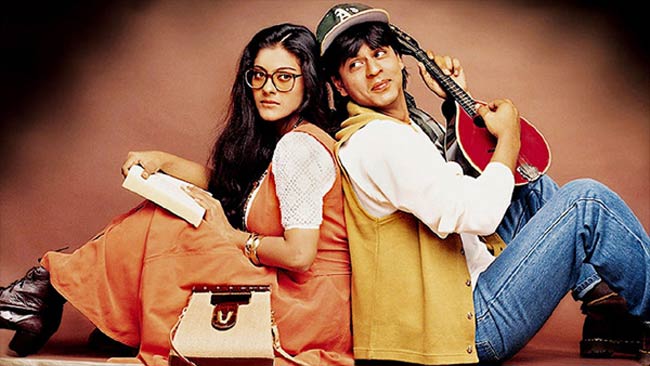 The target audiences of this movie were NRIs & PIOs. The flourishing dahlias and blossoming brooks were a welcome change from the run-of-the-mill love stories that were in production back then. It was, at that time, Yash Chopra’s biggest hit. He had given to the industry a new lead actor & simultaneously managed to launch his own son, Aditya Chopra!

It is a little known fact that Shah Rukh Khan had turned down this movie, initially, as he didn’t think the audience would accept him in a positive role (he had been established as a baddy in films like Darr & Baazigar). But later, as we all have come to know, Yash Chopra (who had also directed SRK in Baazigar) convinced Shah Rukh to take a leap of faith which reaped rich rewards for him.

The birth of Prem took place in a movie called Maine Pyar Kiya, but, Salman Khan came into his own when he played Prem in this marathon movie. A docile Madhuri Dixit lent her acting prowess to the character of Nisha, in which she looked her dazzling best. The on-screen chemistry between the two future-stalwarts was awe-inspiring. 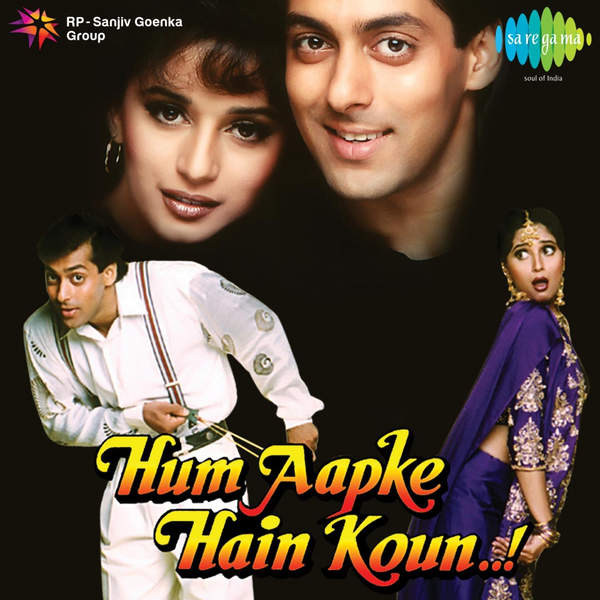 The ideal son, the selfless brother, the heart wrenching storyline, all lend credence to this being one of the best movies ever made in Indian cinema.

Patriotic cinema has always done really well in India. This was a one-of-a-kind attempt at making a fictional patriotic period movie!

The risk involved was huge & everything about this movie screamed out saying that this movie was destined to be a flop. It was over three & a half hours long with village settings & an uncharacteristic nonchalance about it. It was to everyone’s surprise that it opened to such rave reviews & eventually made its way to the Oscars.

The film inculcated within us the feeling of being Indian & on a personal note, I remember coming out of the theater on the eve of watching this movie feeling like the most Indian man there ever was.

Amol Palekar’s uncommon comic talent for playing mousy characters & Ashok Kumar’s flamboyance as Gen Julius Wilfred Nagendranath Singh is still stuck in the mind of the audience who managed to catch that movie. The victory of the underdog against all odds is a theme that has a universal appeal & yet such few movies were made on this topic, back in the day.

The narration of Palekar’s situation, his sudden character upheaval to trounce a puzzled Asrani, all the while managing to win the coy Vidya Sinha’s heart, all seemed to be in tune with the central theme of the movie.

Being an offbeat movie, though, did have its own set of drawbacks. This movie never really came into the limelight until the movie made its way into the homes of audience via the small screen, where it was duly appreciated.

Mother India is a classic example of a movie made to depict the power of the Indian woman! It was one of the first movies to be made on this theme & inspired a slew of movies that tried to copy the directorial & acting genius portrayed in these movies.
Nargis Dutt is a name synonymous with acting brilliance today. This was the movie that brought out her raw acting talent into the world’s eyes. Incidentally, this was also the movie that united Nargis with a certain Sunial Dutt, a union that led to the birth of one of the long standing warriors of Indian Cinema, Sanjay Dutt!

I think it is safe to assume that anyone and everyone who has ever seen Andaz Apna Apna has been rolling on the floor laughing. Why this film bombed at the box-office at a time when comedies, let alone of this level, were hard to come by amazes me till date.
The best part about a comedy is the fact that it has great repeat value. This piece of comic genius, though, is so outrageously hilarious that you just don’t want the scenes to end. Several characters like Crime-master Gogo, Teja & Robot are still deeply imprinted in the audience’s mind. Dialogues like ‘Aankhen nikal ke gotiya khelunga’ & ‘Jhakaas’ are also modes of wholesome entertainment. 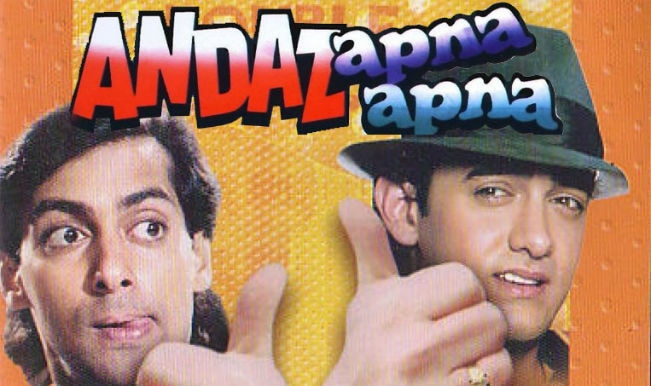 Kaun, Deewar, Taare Zameen Par, Chak De India, Purab Aur Paschim, Guide, The Legend of Bhagat Singh (this is the one with Ajay Devgan in it).

Hope you liked my selection. I know that there are going to be a lot of debates & criticism of the choices and I welcome all of your inputs. All I can say is I have been as unbiased and true to the task, as I possibly could be…