Udta Punjab is a sincere effort to show the sad state of Punjab’s youth due to their high involvement in Drug abuse. However, so far the journey of this film has not been very smooth. The makers of this film are having the toughest time due to the Censor Board’s unfair take on it.

Central Board of Film Certification (CBFC) chief Pahlaj Nihalani, has ordered 89 cuts in the film and asked the filmmakers to remove any reference of Punjab and its relation to drug abuse from the film. He even demanded to remove the reference to politicians, elections, and any visual showing substance abuse in the film. As if this was not enough, he also asked to drop off the word “Punjab” from the film’s title. There are speculations that the censorship on Udta Punjab could be a political agenda because of the assembly elections scheduled in Punjab next year. Politicians might fear that the representation of drug addiction in the state shown in this movie can turn down their vote bank.

In his defense, Pahlaj Nihalani stated that all the cuts ordered in the film are legitimate as they put Punjab in the bad light. The audience, which was very excited about the film release after watching its thrilling trailers, is disappointed too because of the controversial conflict going on between Udta Punjab Makers and Censor Board. The release date of the film is just one week away and still there is no confirm announcement on it. 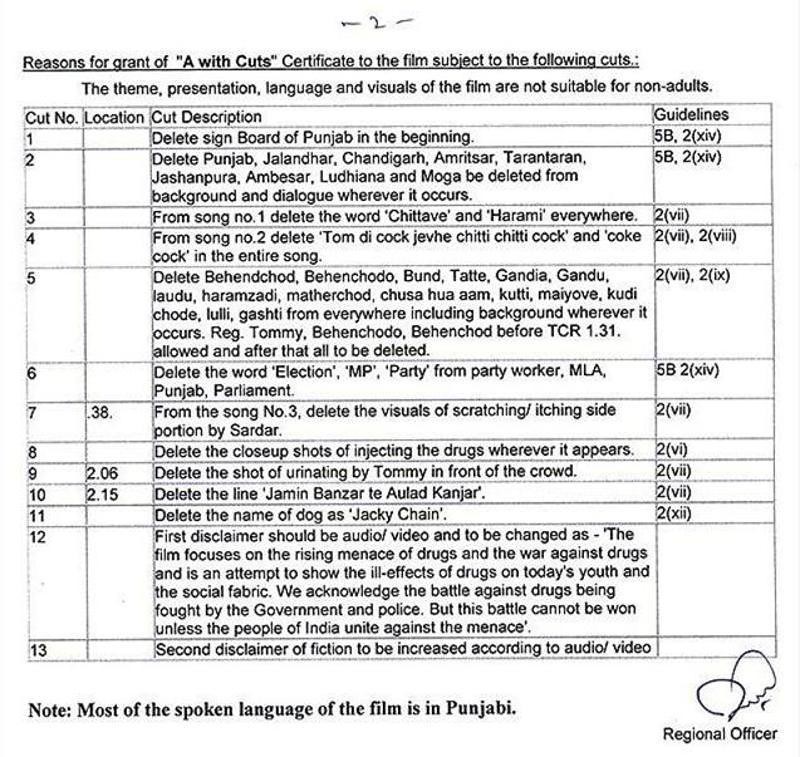 Well, this is not the first time when a movie made on serious issues has become the victim of board’s scissors, there is a long list of the films made on various social issue halted by the censor board. Drug abuse is one such serious issue prevalent in our society. Moreover, the soft target of the drug abuse in any country is its youth.

Punjab is one such state in India, which accounts for the highest number of drug addicts in the country. Almost 70% of the drug addicts in the Punjab are youth. So, it is really important that such cinema should be made which put light on the deadly effects of drug abuse in one’s life and society, be it in Punjab, Goa, Rajasthan or for the matter any other state of our country. And it must be the duty of Censor Board that instead of breaking the back of filmmakers for making such relevant films they must encourage them.

To be exposed is a guilty parties biggest fear.If Udta Punjab can do it pre release,imagine what it will do post.Way to go team #UdtaPunjab

A large number of people from the film fraternity have come ahead in support of “Udta Punjab”. Many celebrities and directors have taken it to twitter and asked the makers of the film to keep their battle on against Censor Board. Directors and Producers of the film have asked Censor Board to not make those unnecessary cuts in the film so that the audience can see the harsh reality of the drug addiction world and learn a lesson from it.

The matter has now been taken to the Bombay High Court against the Censor Board. The Bombay High Court on Friday pulled up the Central Board of Film Certification (CBFC) for insisting on ‘censoring’ films instead of ‘certifying’ them and demanded to know why it was not banning ‘Udta Punjab’ film if it was trying to glorify drugs. The High Court has said to announce its order on Monday, i.e. 13th of June 2016.

We all hope the film gets a green signal without any unnecessary cuts for its release on 17th June and the audience gets to see its intact version. After all Anurag Kashyap said it right, “Let the audience decides what they want to reject.”

What Does the Youth Think About ‘Udta Punjab?’

Landmark judgement#UdtaPunjab will fly and so will the voice of freedom and expression. Thank you all for the support. This is your victory