Since childhood, my brother has always been a fan of those dreadful movies, while people found them freaky, He happened to enjoy it shamelessly. Let’s not waste more time and try out on the list I have curated to choose from for all of you. Ouija : Origin of the Evil This is an American … Read more

“Hell is empty and all the devils are HERE.” – William Shakespeare Trick and Treat! Halloween is right around the corner.Ghosts, vampires, witches, bats, spiders, and monsters. It’s Halloween’s festivity and terror all mixed up in one delightful day. And naturally, it’s everybody’s favorite time to watch a good horror film. Here is a list … Read more

Annabelle: Creation adds another strong chapter to the Conjuring franchise – and confirms that freaky-looking dolls remains a verified means of petrifying the audience.

I am a horror movie buff. I have been an ardent audience for the whole conjuring series. When I got to know that “Annabelle: Creation” was releasing on 18 Aug 2017. Honestly, I thought I would not watch the movie in the theater considering I was really disappointed by “Annabelle”. Thank the Almighty ! after seeing tweets & posts about the movie the horror movie fanatic in me lead me to the theater. Luckily, I was not disappointed this time.

Mr. & Mrs. Mullins suffer the tragic loss when their darling daughter bee dies in a car accident. Twelve years later, Mr. & Mrs. Mullins allow Sister Charlotte orphan girls from a shuttered orphanage to stay at their house as they wait to be adopted. Upon arriving at the Mullins home, the girls – including best friends Janice (Talitha Bateman) and Linda (Lulu Wilson) – become besotted with the place, eager to explore the house & pamper themselves with luxuries in the house.

The arrangement for the girls stay is made on the upper floor. As, one room remains locked off & no one is allowed to enter that room. However, one night Janice who is specially able receives a mysterious note & walks into the forbidden room, encounters the “doll” that is bizarre & Janice unintentionally sets the demonic presence in the doll free. Transforming a safe sanctuary for the girls into a terrible nightmare.

The fourth film in the Conjuring franchise, Annabelle: Creation is a prequel to 2014’s Annabelle and explores the origins of the possessed doll that has been featured in previous instalments.

Hands down! Sandberg potentially is the star of the movie. Once again demonstrating his eye for crafting engrossing horror sequences that leave the audience on the edge of their seats.I personally loved how Sandberg includes the real Raggedy Ann doll towards the end of the movie.The star cast of the film does an amazing job & the performances of both the child artists standout. The technical aspects of the movie are very strong. From the lighting to the sound everything creates that spooky aura & a blood curdling atmosphere that will linger even after the credits have rolled.Much like the original Conjuring, Creation doesn’t overly rely on jump scares.

Unfortunately, the same cannot be said about the script. Creation contains more than its fair share of well-known horror movie cliches.

In the end, Annabelle: Creation makes for a thrill ride for horror enthusiasts like me– especially those who have been following the Conjuring franchise from the beginning. It doesn’t exactly break new ground, but the prequel is a fine addition to the property.

Holy shit, for a moment there I got a mini heart attack and the next I was laughing my ass off..

Don’t turn off the lights…

From the house of Lets Ring The BBell Productions comes a murder mystery, starring Johny Baweja and Reeth Mazumder, titled A Scandall. The movie has an “A” Certificate, for adult viewing only. In the past, a few movies with A (Adults Only) certificate have done extremely well in box office but they have had huge star … Read more

A Scandall, as the name suggests, is a movie whose plot revolves around a scandal. Among the actors are Johnny Baweja, Reeth Mazumdar, Manav Kaul, Puru Chibber, Tanvi Vyas, and Vasundhara Kaul. The movie belongs to horror, thriller genre and has “A” certificate.

The story is set in Nainital where a 9 year old girl Kuhu drowns in a lake. This accident is followed by another where, her father, Manav, falls off a cliff. However he survives but his life is now riddled with hallucinations. He is also able to now see his dead daughter.

Vidhu who has completed film school hears about this story through his girlfriend Koya. Quickly he decides to turn it into a film. Him and three others reach Nainital to film paranormal activities surrounding dead Kuhu’s family.

The story takes a dark turn when this unsolved murder mystery drags them in a dirty pool of incest, sex and unspoken horrors.

1920 London is a Bollywood horror movie directed by Tinu Suresh Desai. With the little suspense and horror that Bollywood could offer, 1920 London is not for the weak hearted. Our rating is 2/5. It is an average movie, which is okay to watch if you have nothing better to do. Rating – 2/5 Director Tinu … Read more

Mahek is shown to be a young woman living in an urban apartment, the sort we see with thin walls. She has sever agoraphobia, as told by the female narrator.

Watch: Radhika Apte’s Phobia Trailer is Out and it is Spooky! pic.twitter.com/2UM3EafvAX

She feels that if she steps outside her house, bad things would happen to her; like they happened that night.

As the narrator introduces the character portrayed by Radhika Apte, the scene cuts to a taxi which is being encircled by several creepy looking taxi drivers, some of who are climbing up and trying to get in.

The horrors faced by a phobic woman is perfectly captured in the trailer.

It seems like the protagonist has been a victim of a crime, probably sexual or gory in nature that triggered her phobia.

Is it possible that “Phobia” would be the new thriller

Trapped inside her apartment, her phobia seemingly begins to crescendo as the scene cuts to her discovering a mutilated finger in her fridge.

Link to view trailer is only on EROS Now website. This is the direct link to watch the Phobia Movie Trailer – Click Here.

In the days following upto release of movie trailer of Phobia, EROS NOW released four teasers on phobia. Check them out.

What is Agarophobia?
Agarophobia is extreme or irrational fear of crowded spaces or enclosed public places.

Third movie in the 1920 franchise, 1920 London stars Sharman Joshi, Meera Chopra, Vishal Karwal in lead roles. Movie trailer of 1920 London was released by Reliance Entertainment on 4 Apr 2016. The trailer is not for the faint hearted.

1920 London is the 3rd part in the 1920 franchise starring Sharman Joshi & Meera Chopra
Shivangi (Meera Chopra) and her husband, Veer Singh (Vishal Karwal), have everything going well for them in London until, Veer receives a gift from Rajasthan, India. Strange things begin to happen with him and Shivangi becomes increasingly worried as his physical, spiritual & mental condition spirals out of control. Convinced, it is black magic done on him , Shivangi decides to seek help of a spiritual healer & guru Jai (Sharman Joshi).How Jai exorcises to help the possessed man and protect his wife from evil who in turn discovers many shocking truths along the way, forms the rest of the story.

Meera Chopra is also known as Nila. She has appeared in several Tamil, Telugu, and Hindi movies. She is the cousin of bollywood actresses Priyanka Chopra, Parineeti Chopra and Mannara. 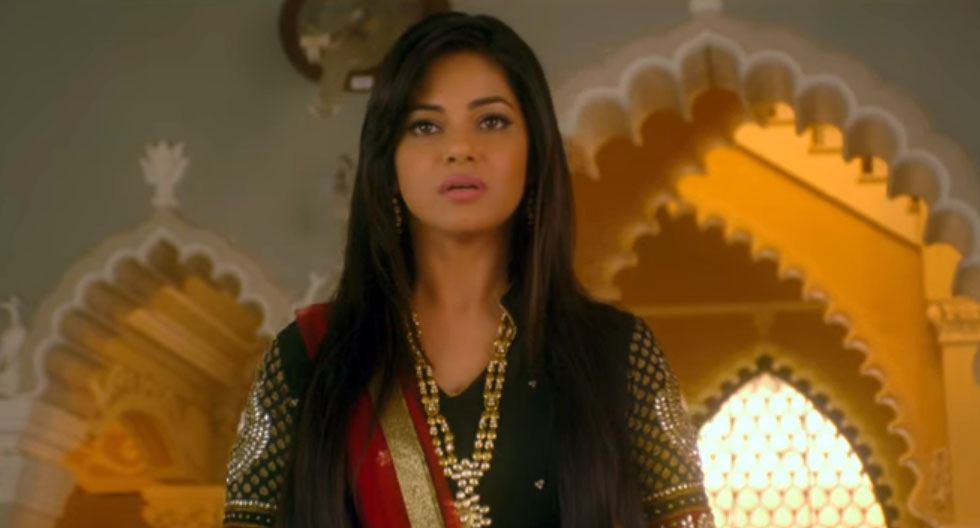 Sharman Joshi who is most popular for 3 Idiots, has been seen doing movies in horror genre lately. Hate Story 3 released in 2015 in which he starred opposite Daisy Shah and Zarine Khan received mixed reviews. 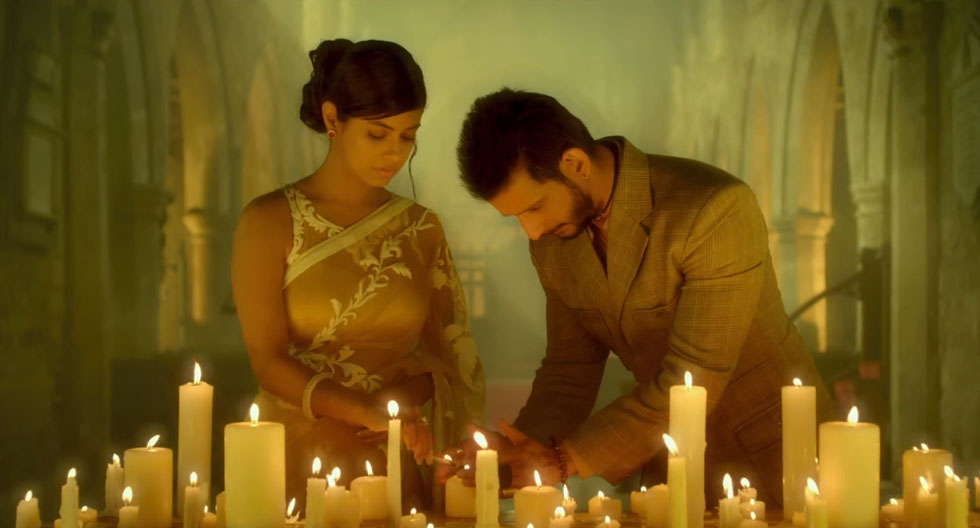 This trailer is spooky as hell!

If you watch this before you go to sleep,

Images and GIFs from video at Y/T.