The long awaited epic adventure drama, Mohenjo-Daro released at multiplexes and single-screen cinemas this week on 12th August 2016. The film stars the handsome Hrithik Roshan and the gorgeous Pooja Hegde  who made her Hindi cinema debut with this epic drama. Veteran actors Kabir Bedi and Suhasini Mulay give them company in some important roles … Read more

Any publicity is good publicity The trailer is a major deciding factor for box office success. The trailer for Mohenjo Daro has received a mixed response from the audience. The trade has also given a mixed response. Also, a controversy has started due to the historians accusing the makers of showing the Indus valley civilization … Read more

Ths new action packed video from Mohenjo Daro is quite cool! We see Hrithik Roshan fighting as a gladiator, against two giant men and then wrestling with a large crocodile.

Mohenjo Daro’s trailer (watch: Mohenjo Daro trailer) was lauded for bringing so many elements in one trailer. From picturesque locales to beautiful people, the trailer seemed quite promising. Now this new action promo ups the anticipation.

Catch Mohenjo Daro on 12 August 2016 in theaters near you!

It was said that the director had set up a self-imposed deadline to complete the trailer before 15 of June and surprise the cast and crew. A full team of the movie was excited to watch the trailer without any previous information. It came as a surprise to them. Releasing the motion poster and the first look of actress Pooja Hedge, the movie’s marketing team had built up anticipation for the trailer.

The movie directed by Ashutosh Gowariker and produced by Siddharth Roy Kapur, Ashutosh Gowariker and Sunita Gowarikar is set in the ancient city of Mohenjo-Daro in Indus valley civilization. The movie circulates around a boy who falls in love with the enemy’s daughter. Director Ashutosh Gowarikar has put in a lot of efforts in this film and according to sources, he took 3 years to develop the movie and also took help of the archaeologists who were involved in documenting the discovery of Indus valley civilization.

The audience is also waiting eagerly for the trailer to hear some music from the movie which has been given by A.R.Rahman. Everyone is excited to see this duo working again on a masterpiece. Prior to the trailer release, the first look of the actress Pooja Hedge, who will make her Bollywood debut with this movie was revealed. The first look of the actress as “Chaani” is elegant and has a lot of resemblance to Cleopatra.

With the trailer launch, the look of the main villain of the movie Kabir Bedi was also expected to be out. Actor Arunodoy Singh also plays a crucial part in the movie. Apart from Hrithik Roshan and A.R. Rahman’s music, the USP of the film is going to be its action and VFX effect. The stunt choreographer from one of the best action movie in Hollywood “Matrix” has been roped in for Mohanjo Daro. For the VFX effects, Ashutosh has taken help of Karen Goulekas who has already established his name in VFX effects by providing his inputs in Hollywood movies like Titanic, Spiderman, Godzilla, The Day After Tomorrow, 10,000 BC and many more. The audience is sure to see some of these effects in the much-awaited trailer.

Since Ashutosh is known to put in a lot of efforts for his movies, he went to visit the archaeological site of Dholavira to get a deep insight for the set he had to create to shoot the movie. The full set was recreated in a movie studio and the outside shoot happened in Thane, Mumbai, Jabalpur and Bhuj. The movie releases with Akshay Kumar’s Rustom. The first look of Rustom has also been released. Ultimately, it is good to see Mohenjo Daro has launched the trailer first and created a hype among the audience.

If you are thinking about epic adventure and romantic film, then you need to watch Ashutosh Gowariker’s Mohnejo Daro. The movie is based on the ancient city of Mohenjo-Daro and will depict the time of Indus Valley civilization which dates back to 2600 BC. This movie is centered on the culture and ancient civilization of … Read more 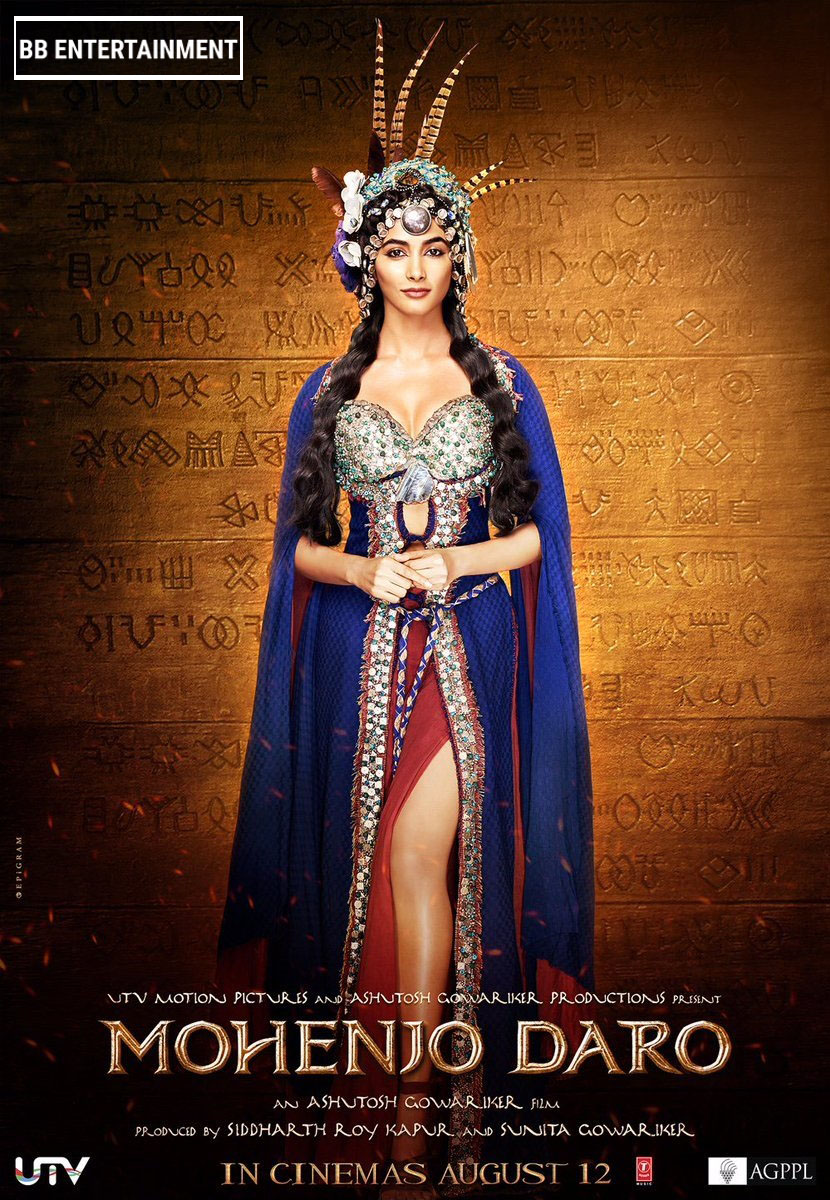 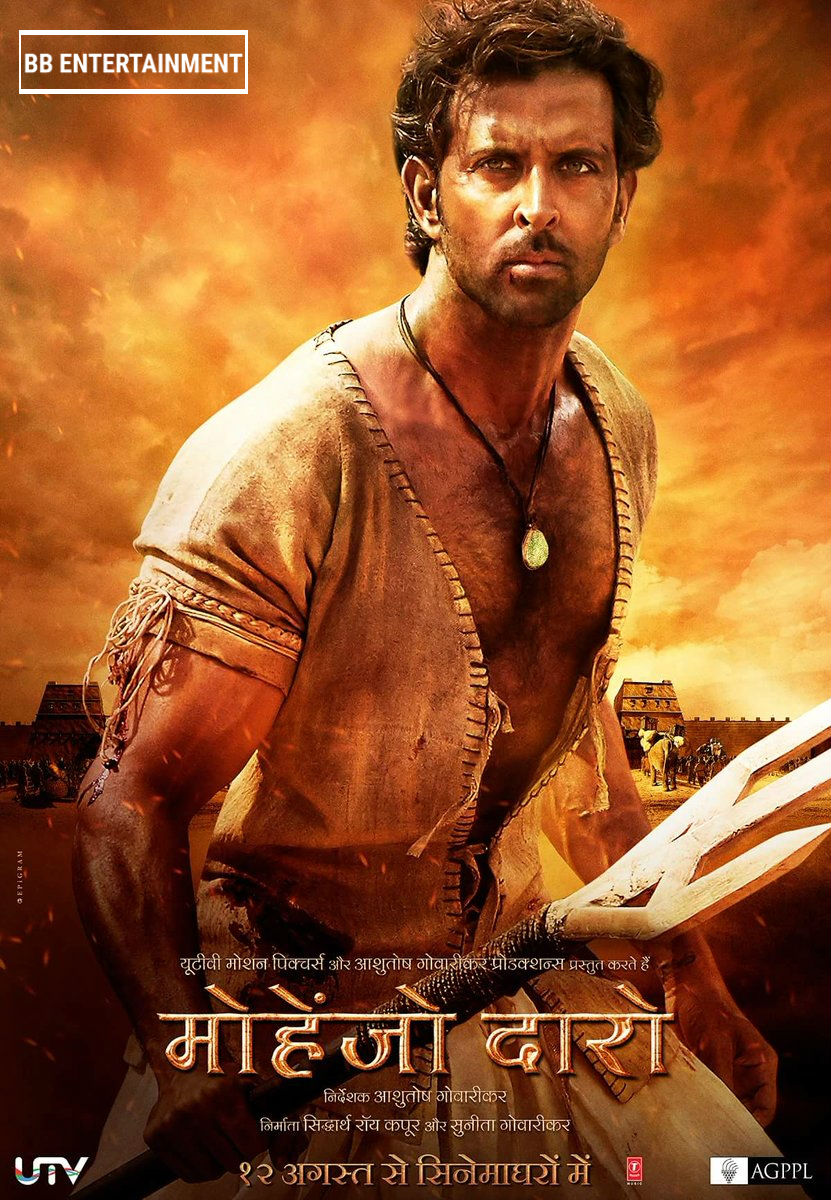 Poster introducing Pooja Hegde’s character will be released on June 16, 2016.

For the past 2 yrs i got to be her! Are you ready to meet #Chaani,The Chosen One….tomorrow i get to introduce u to her… Are u ready?!!!

Hrithik Roshan is known to be picky about his movies. This time round he is back with something different. The premise of Mohenjo Daro looks very interesting. The precise phrase for Mohenjo Daro could be larger than life.

Mohenjo Daro releasing on 12 August 2016 is going to raise the bar for period movies to come in Bollywood. For Hrithik Roshan fans it would be a must watch. Teaser trailer / Motion poster looks quite different and has already got the social media abuzz. For us, it looks like an epic in the making.

Ashutosh Gowariker makes historic pieces in a charming way that only he can. His eye for detail, enthusiasm for impeccable presentation, is evident in the logo that appears at the end of the motion poster. It is just perfect.

Music by AR Rahman in Mohenjo Daro is the cherry on top. That thunderous and chilling background music by AR Rahman gives you goosebumps! So guys, make way for the biggest Bollywood blockbuster movie of 2016!

Mohenjo Daro – Starring Hrithik Roshan and Pooja Hegde, Mohenjo Daro will release on August 12, 2016. Mohenjo Daro is a love story centered around the discovery of the place Mohenjo Daro. Director Ashutosh Gowariker wishes to convey the lifestyle and other facets of civilization of 2600 BC. This would be his second period movie … Read more