Most of the books I had purchased in the recent past were from Amazon. There are hardly any bookshops where I live. So it was a pleasant surprise to see one as I was roaming around a particular plaza (which is just so for its namesake, it is an old building with all sorts of shops). Of course, I walked in.

“Do you have any detective fiction?”

I had just thrown the question in the air. A man, who was balancing quite a number of books in his hand and carrying them towards a shelf looked up. “What sort do you like?”

Well, that was a funny question considering I had just told him I wanted a detective fiction, that was, in my opinion, self-explanatory. In my pause, he added, “which was the last one that you read”.

I was quite shameless to admit that I had read, re-read Sherlock Holmes, Poirot one times too many, and have not yet quite come across any that matched them.

He left the books he was holding and scooted me towards a corner of the shop and pulled out Magpie Murders.

“This one, you will like. I read it in one sitting.”

My ears perked up (perking up ears is something my dog does, I really cannot do it, but you get the idea). If someone says they read a book in one sitting it is usually worth a read.

He took out a few more and animatedly told me what each was about.

There was something about Magpie Murders. The line at the bottom on cover “Seven For A Mystery That Needs To Be Solved”, immediately gave off a vibe of “And Then There Were None”. I had to read it. 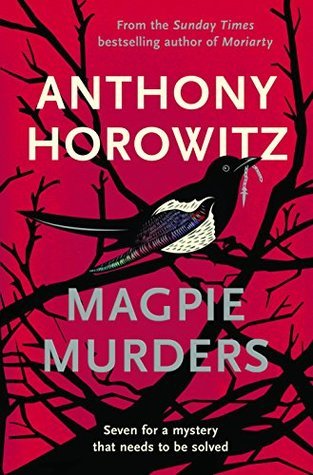 The first chapter is from the point of view of Susan, an editor who had picked up a script of a book, a murder mystery, a classic whodunnit. Then started the story of this quiet town Saxby-on-Avon (it is ironic how the craziest of crimes take place in the quietest of towns). It has the right mix of jolly ol’ vicar and his wife, the doctor and her artist husband, the sister who was wronged, the son who was held too close, the mother who knew everyone’s dirty secrets, the rich man and his wife, and of course, the other man. As Saxby-on-Avon is struck by two deaths, Detective Atticus Pund arrives. Whodunnit? That is the question he has to solve.

But before that happens, Susan is in for a shock. She has to solve a mystery in the real world which is oh so intricately connected to its fictional counterpart. Can she do it?

It is a mystery within a mystery. What more can you ask for?

Frankly, I would have been happy just with Atticus Pund and his tale. Two tales suits just as well though.

What I really liked about Magpie Murders

Should you read Magpie Murders by Anthony Horowitz or not?

If you like detective/crime fiction, then yes, you should definitely read it. Otherwise, if you are exploring new books to read and would like to get a taste of detective chasing murderer/s, then too you should go for it.

One for sorrow,
Two for joy,
Three for a girl,
Four for a boy,
Five for silver,
Six for gold,
Seven for a secret,
Never to be told…

Thank you, that man at the bookshop for suggesting me Magpie Murders.

Thank you, Anthony Horowitz, for this gem.

You can buy Magpie Murders by Anthony Horowitz from Amazon.

If you know of a book that detective fiction lovers like me would enjoy, please comment below. If you wish to share a book review, reach out to [email protected]